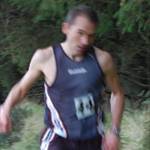 Lloyd Taggart saw off the challenge of Simon Skillicorn and Tom Cringle to win the second round of the Isle of Man Bank Winter Hill League at Glen Helen on Sunday.

The new course was well received with a mix of fire tracks, forest paths and open trails climbing and descending through the plantation.

There was another record turnout with 93 runners taking part.

The racing in the top eight was tight throughout with the final positions only decided in the sprint to the line.

The top junior was Jason Moore, who finished in an excellent eighth place overall, from Will Morris in second and Shaun Moore in third.