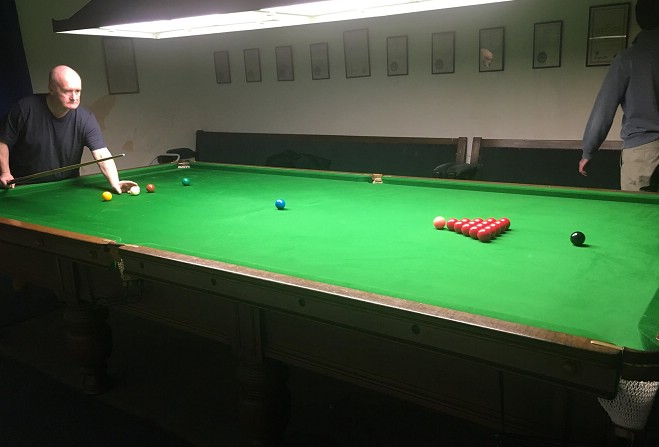 At the conclusion of week nine of the 2018/19 Macs Builders Merchants snooker league, the top four teams are now separated by just three points.

Peel Legion remain top on 28 points, despite losing 3-2 away to a St Olaves team who registered six breaks over 20 in just three frames.

Paul Smyth had a 40 as he beat Kyle Darby, Sean Corkish had breaks of 27, 27 and 24 in his win against Mike Crook, James Kerr had breaks of 37 and 21 as he beat fellow joint-top league performer John Kelly.

Don Humphries defeated Dan Crawley on the black and Geoff Hall came out on top against Harry Davies to keep the westerners ahead of their rivals – just.

It was also a high-scoring affair at Finch Hill, as the 'Mob' ran out 4-1 winners against Douglas Snooker Club 'Hurricanes'.

Pete Crellin was by far the individual performer of the week, as he scored 78 points without reply in a scratch game against 8-Ball Pool pro David Addinall, and 56 of those points were compiled in a single visit to the table.

Tom Miller had a 36 as he beat Chris Dagnall, and there were also wins for Steve Finnegan and Steve Oates – Paul Smith had a 40 break against Oates but still couldn't catch him, and Kirkham had a 20 break for the 'Mob' only to see Nigel Kermode canter to a comfortable consolation win for the guests.

Darryl Hill looks to have re-discovered some form, as he helped inspire a good comeback for Finch Hill 'Young Guns' away at Malew 2 in Ballasalla.

The hosts went 2-0 up through Paul Bridson and Tony Pring, both of whom are now on six wins from eight games, but Hill stopped the rot with a break of 36. It could've been more, but for an unfortunate in-off in the middle pocket.

Nick Stephens and Calum Gardner battled hard for the 'Young Guns' to complete the comeback, including a break of 28 for Gardner who also looks to be finding his touch again. Malew 2 remain second despite the loss.

Further south, Port St Mary Legion moved out of the bottom two after a second impressive win in two weeks – there were breaks of 29 and 22 for Phil Joynes and Shaun Roberts as they defeated Finch Hill 'Rockets' 4-1.

Graham Ashton had a break of 21 but couldn't hang onto Joynes' coattails, and John Spellman was the only winner for the guests as he beat Marc Morley.

John Kennish led the way once more for the Finch Hill 'Musicians', with breaks of 26 and 25 as his team beat Malew 1 4-1 – the other winners were Peter Glover, Matthew Dodd and Lee Hunt with Nick Crouchman avoiding the whitewash for Malew.

Jamie Wilson, Jimmy McDaid and Pat Maher all won for the 'Newbys', with the fourth frame coming from a walkover after the 'Wannabes' could only field four players for the second time in two weeks – their only win came from Fred Corris, and they now sit bottom of the league, adrift by seven points.

Peter Kirkham still holds the highest break of the season with a 68, and also remains top of the break league with 17 points scored so far.

Sean Corkish and Tom Miller are the other two heaviest scorers, on 15.5 and 15 points in the standings, followed by James Kerr and Peter Crellin on 11.5 and 10 respectively.