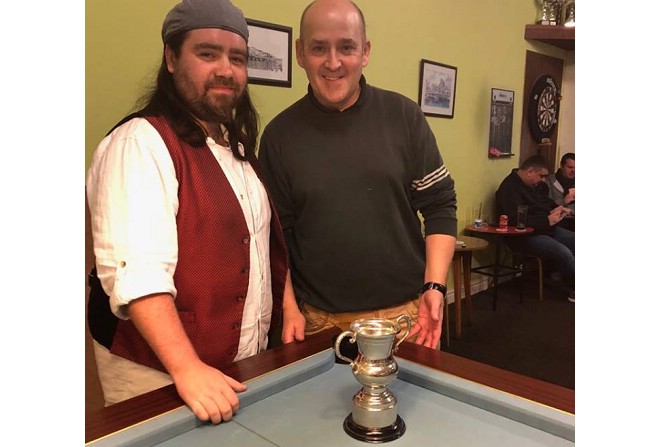 Tom Miller (right) started 4-0 down with the handicap deficit, but won 9-4

9-4 win over Tony Kaneen in the final

Tom Miller has been crowned the 2018 Manx FA Cup of Pool Champion.

Run by the Isle of Man Pool Players' Association, the event is widely considered to be its biggest of the season, with around 40 entrants of all ages and abilities flocking to the Manx Legion Club in Douglas at the weekend.

Matches are contested over a first-to-nine-frame format, with players allocated a handicap by the committee based on their ability - so in theory, everyone has an equal chance of winning.

The top players on the Island start each match on zero, whereas relative novices are given as much as six, or even seven frames as a head start.

The pre-tournament favourites might have included the number one ranked player on the Island Paul Buchan, the national team captain Jason Gaines (both of whom had scratch handicaps), or perhaps Onchan MHK Rob Callister who was making a rare return to competitive cuesports and was given a handicap of four.

But of the Island's elite players, it was Tom Miller and Peter Crellin who navigated their way through the early rounds to book themselves a semi-final spot.

Crellin knocked out Manx number one Paul Buchan in the last 16, winning 9-6, before beating another scratch player, Kevin Corlett, in the quarter-finals.

Meanwhile, Miller won a tense deciding frame in the last 16 to beat Allan McDonald 9-8, but registered more comfortable wins in the last 32 and quarter-finals as he won 18 frames out of 18 en route to two 9-5 wins.

They were joined in the semi-finals by two higher handicap players in Tony Kaneen and Dollin Mercer, both playing off four.

With the event utilising a random draw system at the start of each round, the players' names were put into a hat, and the two scratch handicappers played each other whilst the two rank outsiders would play for a place in the final.

The contest between Miller and Crellin would go the full distance - Crellin went 3-0 ahead and looked to be the man with the momentum, but Miller fought back with some characteristically faultless pool and the scores eventually stood at 8-8.

He managed to complete the comeback, winning another decider and leaving 2016 champion Crellin at the final hurdle.

Meanwhile, Mercer failed to recapture his form from the early rounds and Tony Kaneen stepped up a gear, running out a fairly comfortable 9-6 winner in a one-sided second semi-final.

Starting 4-0 down, Miller once again found himself with a mountain to climb in the final, but looked somewhat in a hurry as he rolled off frame after frame, winning all nine in quick succession to secure a resounding 9-4 victory over Kaneen to take the title.

Miller received £200 for his tournament win, with Kaneen receiving £100 as runner up, and there were awards for the losing semi-finalists.

Dollin Mercer was also awarded the 'Giant Killer' prize, for his 9-4 win against Island captain Jason Gaines which included three total clearances from the break.

Full results can be viewed on the association's page at https://cuescore.com/IOMPPA.