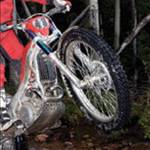 Day one took place at Garey Mooar, Ronague while the second day was held in the dramatic setting of the volcanic rocks at Scarlett.

In A class Tom Maddrell secured a comfortable victory by 50 marks from Jordan Birchall on the testing expert route.

B class saw the return to form of Oliver Megson as Oliver Lace cracked under the pressure and slipped back to third at the close after Carl Owen rose to the challenge.

Juan Lace cemented his C class lead with a day total of six marks, easily better than the adult sportsmen on the same route.

Aaron Molyneux grabbed second ahead of Jack Kelly, reversing the order from Saturday.

D class saw an entirely unfazed Thomas Knight carry on where he left off displaying the trademark Knight cool, rounding off the weekend on 10 marks ahead of Jason Turner in second and Sophie-May Smith in third.

Nigel Crellin revelled in the event and showed all his old style with a superb return of two marks for the day in the adult expert class, the class win went to Nigel Sharp, as Saturday leader Jamie Blackburn was a non-starter.

Saskia Baxter kept up the pressure on the boys with a cracking return of 28 in the clubman class, and Craig Mcgee held on to second courtesy of his Saturday advantage as Ed Duggan returned the better card for the Sunday.