Wells will be 'sorely missed' at Billown 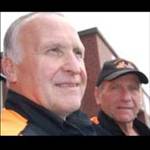 Organisers of the Southern 100 are paying tribute to popular competitor Dave Wells, who died following a crash at Mallory Park at the weekend.

They say his death, 'leaves a massive gap in the ranks of the sidecar racing fraternity, none more so than at Billown, home of the Southern 100 Road Races'.

Dave first raced at the Southern 100 in 1979, not as a sidecar passenger, but as a driver with Tony Smith in the chair.

(Picture: Dave Wells, on the right, with sidecar driver Roy Hanks, who received 'minor injuries' in the accident in which he lost his life. Picture courtesy of the BBC).