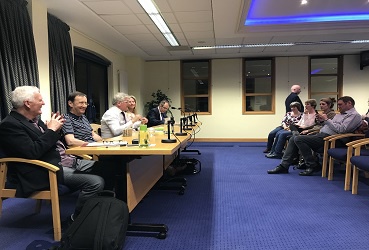 Tomorrow (Sunday 31 March), on Perspective, we bring you a meeting which was held in Ramsey Town Hall last night (Friday 29th March).

The debate started with Brexit, and Alfred Cannan was keen to make clear that the Island is ‘as fully prepared as we can be’. He also pointed out that ‘Brexit could bring a lot of opportunities to the Island’.

The second item for discussion was the proposal of a marina for Ramsey. Roger Tomlinson suggested that the project would not be completed in his lifetime, whilst Richard Radcliffe and Jennifer Houghton raised questions over environmental consequences of the marina.

The third discussion point raised by John Moss was public transport, and more specifically the new connectVILLAGES service for the North.

The subject of the environment surfaced briefly. Unfortunately, due to a diary clash, Bill Dale of beach buddies, who had planned to be on the panel, had to withdraw. Richard Radcliffe, who stepped in to fill Mr Dale’s place said that as soon as Bill gets his knighthood, the better.

The next topic discussed was the teaching of Religious Education, which is compulsory in Island schools up to and including GCSE level. Roger Tomlinson said that ‘Parents must accept responsibility for their children’s education’.

On the subject of opposition in Tynwald, Alfred Cannan, a member of the executive government, said that for a parliament to run properly, an ‘opposition is vital’ whilst Roger Tomlinson arugued that ‘if the government has made to mind up behind closed doors, that is what will prevail in Tynwald’. You can hear a podcast of the Perspective episode on this topic here.

Finally, the panel moved on to the discussion of Health, and the overall consensus was voiced by Roger Tomlinson, who said that ‘as citizens we have no critique of our health service’, and Jennifer Houghton said ‘I’ve never had a cleaner hospital to walk into’.

John Moss concluded the discussion by asking the panel if they won £100000000 on the lottery, how they would make the island better. Answers ranged from saving the money to help future generations, to investing it into more business, and building a modern theatre.

You can hear the debate on Manx Radio’s Perspective programme from 12 - 2 tomorrow (Sunday 31).