It’s good to have a big brother around when you’ve just won your class! Our latest report from The Guild 2018 has all the details.

Tonight’s hour-long selection of class winners includes performances from the six contenders for this year’s Cleveland Medal - the highest honour which  the Manx Music Speech and Dance Festival awards to one adult singer. Listen - and decide who YOU think should receive the glittering prize in the finals on Friday night.

The programme on Wednesday 25 April featured the following (please note that the list below is not necessarily the order in which the pieces are played in the programme):

TALYA GIULIANI - Winner of the Spoken Word class for 7 year olds.  Her poem is called The Snowman

Cleveland finalist number 6 - OLIVIA BLACK - Winner of the Special Soprano solo voice class, accompanied by Frank Wooley and singing ‘Do not go, my love’ by Hageman

ARABELLA AYEN - Winner of the Plucked Strings class for Grades 4 to 5 - She plays two harp pieces by Rachel Hair, for which she was awarded 90 marks - and a first place!!

KAREN ELLIOT - Winner of the Vocal Solo by a British Composer - Karen was awarded 90 marks for 'Let the Florid Music Praise!' by Britten.  Her accompanist is Mary Frankwick. 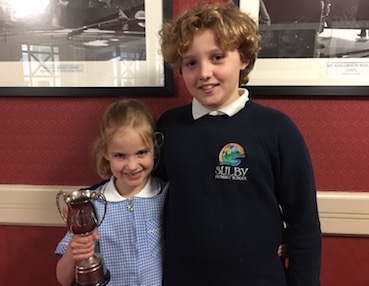