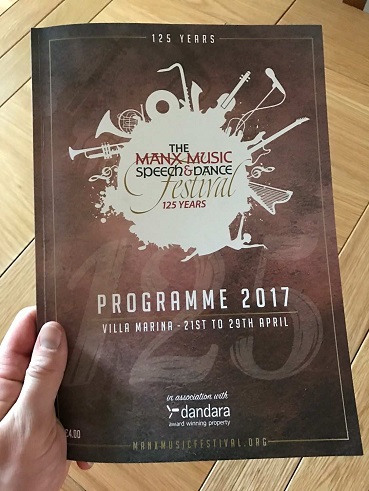 Programmes at the ready ...... SUNDOWN goes to The Guild for the first time - with highlights from the first three days of competition in the 125th Manx Music Speech and Dance Festival.  Here's the full playlist :

ESTELLE OKE  took second place with 85 marks in the Instrumental Solo - Brass class (up to year 6).  She played the Pink Panther theme on Eb Tenor Horn accompanied by Julian Power

GRACE LEE  won the Folk Song class for years 4 to 8.  She sang "At The River" by Copeland

EVAN DARROCH was placed third in the Folk Song class for years 4 to 8 with 88 marks.  He chose to sing "The Scottish Soldier" by Andy Stewart

WILLIAM KING - winner of the Instrumental Solo - Brass class for Year 9 and 10.  William, playing "Fantasy For Trombone", won with 87 marks.  His accompanist is Julian Power

AILISH WILLIAMS took second place in the Instrumental Solo - Brass class for Years 9 and 10.  She had 85 marks for "Demelza" played on Tenor Horn

What are the Adjudicators looking for in a winning performance?   Here's a little bit of the ADJUDICATION ......

MANX VOICES won the Gaelic Choir (Adult) class with 86 marks.  "Graih My Chree" is part of their winning performance. Their musical director is Angela Stewart

LON DHOO Male Voice Choir, directed by Wendy McDowell and accompanied by Regina Kaniewsky, won the Male Voice Choir class with 85 marks.            "The Saints Go Marching In" is part of their winning performance.

ROBYN-MAE LAWLER won the Songs from the Musicals class for Years 9 to 13. She sang "Vanilla Ice Cream" from "She Loves Me" and her 95 mark was the highest awarded in any class in The Guild this year.  Madeline Kelly is the accompanist

LOIS MOONEY was runner up in the Songs from the Musicals class for Years 9 to 13.  Her choice was "I Hate Men" from Cole Porter's "Kiss Me Kate"and she was awarded 94 marks.  Her accompanist is Madeline Kelly

MANX YOUTH BAND "A"  were the winners of the Brass Quartet class for up to Year 10.  See how many of the tunes you can name in Alan Fernie's arrangement called "Let's Go"

MUSICALE were winners in the Choir Concert class.  "The Rose" is one of the pieces in their 15-minute concert, for which they got a class-winning mark of 89. Judy Cross conducts Musicale, whilst Jennifer Bird is the accompanist

An ensemble from RUSHEN  SILVER BAND were placed second in the Brass Ensemble class (up to Year 10) with 85 marks.  Their first piece is "Moherentanz" from a suite of Renaissance pieces arranged for brass by Colin Evans

Another piece by the ensemble from RUSHEN SILVER BAND, who placed second in the Brass Ensemble class (up to Year 10).  This is Pizzicato Polka by Johann Strauss II