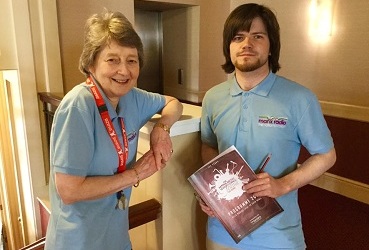 Many thanks to Tim Price for his very hard work throughout the whole nine days of The Guild - his recording and production skills make it possible for us to broadcast performances at the best possible quality.  We simply couldn't manage without him!

SUNDOWN - our regular Sunday night late show on Manx Radio - went to The Guild for one last time on Sunday 30 April, to bring you some of Saturday's class-winning performances, mixed with highlights from The Festival's Finest - the grand variety concert which has now become the traditional end to the Manx Music Festival.

OLIVIA BLACK  accompanied by GARETH MOORE  were invited back to the Festival's Finest Concert to reprise their Most Entertaining Performance in the Songs from the Shows class, where Olivia and Gareth were also placed second.  The song is "Sing But Don't Tell" from the musical "Island Song"

MAROWN RECORDER GROUP - a winning performance from earlier in the week.  The recorder group from Marown School won the class for Recorder and Tin Whistle Groups up to Year 6.  Listen to them play "Step Lively" for which they were awarded 88 marks

JANE CORKILL and PAUL COSTAIN - won the Vocal Duets class on Friday night, and were invited back to sing their winning song  - "I Arise From Dreams Of Thee"  - in the Festival's Finest Concert.

In competitions in the Promenade Suite on Saturday morning, EVAN DARROCH won the Boys Solo in Manx up to Year 10.  He sang "Arrane Ben-Vlieaun" accompanied by Madeline Kelly and had 83 marks

ERIN LOACH won the Girls Solo in Manx up to Year 10, with 84 marks for her singing of "Arrane ny Jinnyn"   Her accompanist is Madeline Kelly

Another performance from the Festival's Finest Concert - MANX VOICES DREAMERS were the winners of the Quartet class for 2 soprano and 2 alto lines. "Mister Sandman" was a popular choice and earned them 89 marks in competition.  Their accompanist is Patricia Cullen

ROBYN-MAE LAWLOR took first place in the Songs from the Musicals - years 9 to 13 - with the highest mark awarded in The Guild this year - 95 !   Her song choice was "Vanilla Ice Cream" from the musical "She Loves Me"   Madeline Kelly is her accompanist

ALEXANDRA SLATER - WINNER OF SHEFFIELD PLATE 2017 - singing again the set piece for her age group - the Manx traditional song "O What If the Fowler My Blackbird Has Taken?"  Her accompanist is Frank Woolley

Another act from the Festival's Finest Concert.  MARTIN NORBURY won the Instrumental Solo - Brass - with 91 marks for playing "Napoli" on Euphonium

MUSICALE won the Adult Choir Concert Class with 89 marks.  They were invited back to the Festival's Finest Concert to sing  two songs from their 15-minute concert programme.  They chose "The Rose" and "Mack the Knife"  They are directed here by Mrs Judy Cross and their accompanist is Mrs Jennifer Bird

MARILYN CANNELL's song to celebrate 125 years of the Manx Music Festival made a welcome re-appearance at the Festival's Finest Concert.  Marilyn not only composed words and music, but also sang it in the concert, and accompanied herself on piano.

MANX CONCERT BRASS  had a good week with high marks and class wins.  Here they play "American Trilogy" from the Concert Class performance which earned them 92 marks.  Ian Clague MBE is their Musical Director

Teacher Richard Corlett was justifiably proud of his PEEL CLOTHWORKERS' SCHOOL GAELIC CHOIR who took first place in the Gaelic Choirs class in the Promenade Suite on Saturday .  They were awarded  88 marks and sang  "Yeesey Creest" and "Fern y Clien Click"

MANOR PARK SCHOOL CHOIR were the winners of the School Choirs class for schools with less than 150 pupils on the register.    They were given 89 marks for their performance of two songs -  "Zip-a-dee-doo-dah" and "Seek Ye First The Kingdom of God"

The BUCHAN FALCONS Boys Choir were invited back to the Festival's Finest Concert, and here they sing "One Candle" from their class-winning performance

RUTH TICKLE - CLEVELAND MEDAL WINNER for 2017 was the final act in the Festival's Finest Concert.  Here she sings her own choice piece from the Cleveland contest - "At The Well" by H. Hageman.  Ruth is accompanied by Patricia Cullen.

CASTLETOWN METROPOLITAN SILVER BAND won another new award in the 2017 Guild - the Gordon Kennaugh Astill Cup for the Most Entertaining Programme in the Brass Band Concert Class.  Listen to "The March of the Torreadors" from their concert programme which had an opera theme and included some fine costumes!

Pianist AMY BLOCH was another class winner who returned to the Festival's Finest Concert.  She plays "A Stormy Night"

ARTHUR BAWDEN took second place in the Folk Song class with 88 marks for a very lively performance of "O 'twas in the Broad Atlantic" - listen out for audience participation in the final chorus!      His accompanist is Patricia Cullen

PAUL COSTAIN - winner of the Songs from the Shows - sings "If I Was A Rich Man" from Fiddler on the Roof, accompanied by Jill Collings