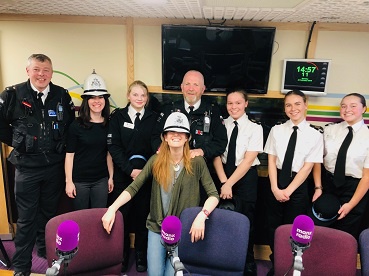 On the programme today: -

Beth and Christy were joined by Constables Mike Griffiths and Paddy Moore, along with young Cadets Danni, Bonnie, Ellen and Sophie, to find out about the Police Youth Scheme - and also to hear the details of what's going to happen to Beth and Christy on Friday, as there are rumours that they may be arrested..!

- also on the show, we talked to Mike and Paddy about the latest internet craze, 'Momo', which appears to be encouraging young people to hurt each themselves and each other

- we looked back at the weekend of glitzy award ceremonies, mainly the World Bonnag Championships in Dalby, won by Dan Sayle who is usually more famous for his bikes than his baking... but also a little something called 'the Oscars'

- we heard very encouraging news about a development in the detection of sepsis which means blood analysis can happen in a matter of minutes rather than days; for more information about sepsis symptoms and more, visit www.manninsepsis.com

- and loads of you got in touch with your thoughts on trampoline gate..in which a furious pensioner is claiming his privacy is being invaded by the family next door whose children are able to look through his windows when bouncing on their trampoline!