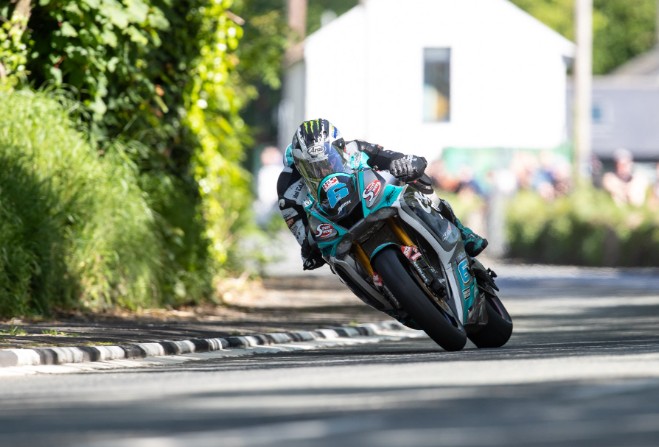 Northern Irishman bags another win in class in dominant performance

The Northern Irishman finished 3.3 seconds ahead of Peter Hickman who was followed by Dean Harrison in third.

It means double success for Dunlop having also won the first Supersport race of the racing fortnight on Monday (6 June) - he finished today's contest with the fastest lap of the race as well registering a 128.536mph.

33-year-old Dunlop set some strong early markers in the opening stages of the first lap, quickly opening up a gap on Dean Harrison on his DAO Racing machine.

He spoke to Chris Kinley after the race:

But Peter Hickman - who finished third in the previous Supersport contest - got himself on the trail of Dunlop, putting himself less than a second behind the Northern Irishman throughout the sectors.

By the time the second and final lap got underway, Dunlop and Hickman began to extend the advantage over Harrison in third who in turn had created a good cushion of time between himself and those chasing outside the podium places.

Hickman caught up with Chris Kinley afterwards, and said the wind was a real challenge in places:

Harrison also struggled with the wind, but told Chris Kinley the race has put him in a good position for the Senior Race:

Further down, there was more heartbreak for Lee Johnston who was forced to retire from the contest on his approach to the Grandstand.

But positives elsewhere as Jamie Coward - pushed up the running order for the race - found himself in a top five spot going into the second run around the TT course.

By Glen Helen on lap two - Dunlop had kicked the pace up a notch, opening up a near two-second gap on Hickman in second who'd now created a 9.5-second advantage on third-placed Harrison.

Aboard his MD Racing Yamaha, there was no let up from the leader who held on to claim victory and stretched his dominance even further come the chequered flag to take top spot over three seconds ahead of his nearest challenger.

Meanwhile, just missing out on podium places were Davey Todd who took fourth spot - 17.57 seconds behind Harrison in third - and Jamie Coward on his Yamaha rounded off a solid performance to hold onto fifth place.