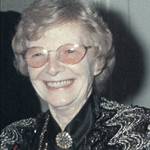 Tributes have poured into Manx Radio for a stalwart of Manx journalism who will be fondly remembered.

The journalistic career of Esther Richmond of Ramsey spanned more than half a century.

Highly respected within judicial circles, she worked for both Isle of Man Newspapers and Manx Radio for decades.

Esther Richmond’s funeral will be at Glen Auldyn Chapel at 11am on Saturday, April 27, followed by interment at Lezayre.

You can also read two court eulogies below:

Statement by His Honour the Deemster Doyle First Deemster and Clerk of the Rolls, in respect of Esther Richmond.

It was with great sadness that I received the news this morning that Esther Richmond had died after a recent illness.
It was only a couple of weeks ago that I visited her at Nobles Hospital one Friday night on my way home from work. She was in good spirits. I am glad I had an opportunity to talk to her and tell her how much I appreciated the contribution she had made to the Island.
At the swearing in ceremony of the Deputy High Bailiff on the 29th July 2011 I took the opportunity to thank Esther for her contribution to the coverage of criminal cases appearing in the Summary Courts and in the Court of General Gaol Delivery. The involvement of the media in fair and accurate court reporting is essential to maintain and enhance open justice in this jurisdiction.
Esther had been reporting on the proceedings before the court for over 40 years. That is an outstanding achievement. I am glad that I was able in open court to thank Esther in her presence and to congratulate her on a job well done.
I used to occasionally bump into Esther during my walks to get some fresh air over the luncheon adjournments. She was always frank and robust in her views. I did not always share her strongly held opinions but I respected the honest way in which they were delivered. She had the best interests of the Island in her heart and in her soul.
Jeremy Bentham said 'Publicity is the very soul of justice. It is the keenest spur to exertion and the surest of all guards against improbity.' Esther has played a significant role in ensuring the open administration of justice on this Island in the publicity she has given to the proceedings before the Courts.
When I was appointed a Bencher of Gray’s Inn Esther sent me a note of congratulations which was most appreciated. Esther was a kind, thoughtful and sensitive woman.
Esther was a remarkable woman who with her reporting of court proceedings played a key role in maintaining and enhancing open justice in this Island. I will miss Esther. The Island has lost one of its real characters. I extend my sympathy to Esther’s family and friends.


Eulogy for Esther Richmond by the Deputy High Bailiff on April 19, 2013.

Before Court starts this morning I would like to take the opportunity to say a few words to mark the sad passing of Esther Richmond on Tuesday of this week.
It was with sadness that I learnt of Esther’s passing on Tuesday after a long illness. Her presence has been missed in Court these last few months and will be missed in the future. She has been a Court reporter for over 40 years and has a wealth of knowledge of Court procedures but perhaps more importantly and more pertinently as far as Esther is concerned a wealth of knowledge of the people that appeared in Court both as Defendants, Advocates, Members of the Judiciary. Esther knew not only about the people that attended but also their extended family and perhaps had a greater knowledge of the people of the Isle of Man and their association with the Courts of Justice than anyone else.
I am probably the least appropriate person to speak of Esther having been in post for a relatively short time and only on the Island for a period of five years but I am also in the unique position of having known her as a member of the Judiciary and also as a Prosecutor.
Esther was a no nonsense individual who didn’t suffer fools gladly and she wasn’t afraid of making that fact known, in fact I can hear her bristling now in the Press box as I speak. But behind that no nonsense exterior was a very kind heart but not just a kind heart but practical as well and in particular I remember her kindness when on our first arrival at the Island my husband was ill and looking for things to do to occupy his time. It was Esther who put us in touch with her brother Dollin and provided him with employment with the Port St Mary Life Boat Institution as a volunteer and also information about local work in the area for him.
I also remember Esther’s humour which I think at best can be described as being dry and in particular her relationship with Mr Moyle when he was the High Bailiff. She referred to him as “the boy”, but it was his regular asides and pointed comments looking towards the Press Box particularly when making observations about people over 80 not being allowed on the roads of the Isle of Man. Esther took it all in very good spirit and I am sure gave as good as she got behind the scenes. I also recall as a Prosecutor the look of disdain on Esther’s face whenever I said or did anything with which she disagreed and I am sure other Prosecutor’s have felt that look as well. Sometimes a look from Esther was worse than a look from the Bench but against that and again as evidence of her kindness was the constant supply of
lemon drizzle cakes delivered both to the Attorney General’s Chambers and also to Police Headquarters.
She was, as His Honour Deemster Doyle said in his statement one of the Island’s characters. She will be sadly missed by court administration, the Judiciary, the Prosecutors, the Police and Advocates who appear before her. She will also of course be missed by her family and I extend my condolences to her friends and family, particularly her brother Dollin and his wife Jean and Esther’s nephews and nieces. She will also of course be sadly missed by her colleagues who have lost an enormous wealth of experience and knowledge.
Thank you.