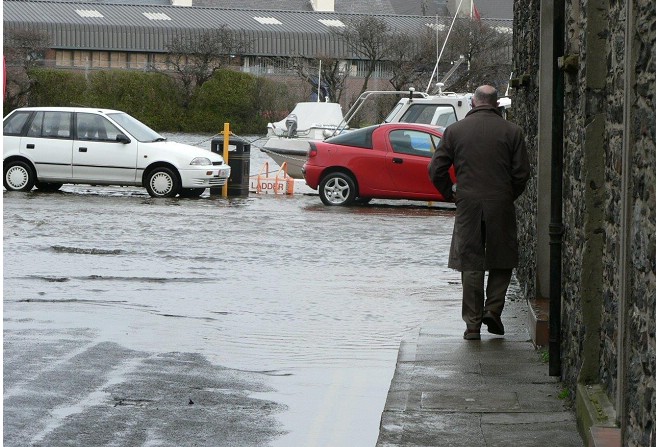 Plans to shore up tidal defences along Ramsey's quayside have been made public by the Department of Infrastructure this week.

Commissioners in Ramsey discussed the proposals at their first meeting in the Town Hall since lockdown was lifted.

The flood protection scheme, unveiled by the DoI, will involve the construction of a concrete wall that will run the full length of Derby Road, down to the harbour side in front of the Old Custom House.

This will also tie in with further regeneration works for the town, with an enhancement of the quay's highway similar to that on Parliament Street.

Since 1873 there have been 21 floods in the town of Ramsey, 10 of which were tidal events.

These figures were brought to light as a result of the floods in Laxey which devastated more than 60 properties last year.

In that report by engineering consultants ARUP, it identified Ramsey as the town at the highest risk of flooding on the Island.

The plans were first made available to commissioners earlier in the year, who weren't sold on the designs as it took away parking.

There were also objections to the granite paving intended for the road, which the commissioners say they've had trouble cleaning in the town's main shopping area.

Four months later, the department has now made the plans public and have, according to the commissioners, completely ignored their feedback.

'If you aren't interested in what we have to say, why bother asking?' said Juan McGuinness, who was unimpressed with the supposedly revised proposals.

He says despite the board's suggestions, the design has stayed the same.

It led to Mr McGuinness lambasting the DoI, a department which he says 'cares so little' for the opinion of the commissioners.

Chairman Andy Cowie agreed that a written response to the department would involve a 'significant flush of disappointment'.

The initial drawings of the proposals can be viewed online at the commissioners' website.