'Tax avoidance is the crucial issue of our time' 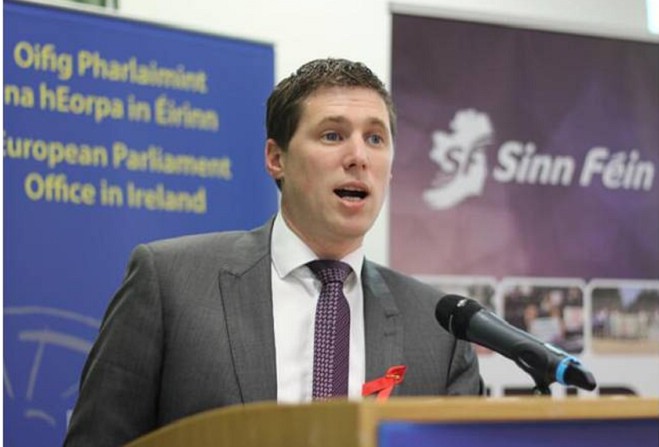 Irish MEP reflects on TAX3 visit to the Island

A member of a special inquiry of the European Parliament says he is encouraged by the 'genuine desire' in the Isle of Man to fight tax crimes, but believes questions still remain on VAT policy.

Matt Carthy MEP, who sits on the TAX3 committee which investigates tax evasion, tax avoidance and money laundering, visited the Island last week as part of a 'fact-finding' delegation from Brussels.

Matters of which Mr Carthy says, are the crucial issues of our time.

"Our priority has been to source as much information as possible into how it is that the wealthiest individuals and companies in the world avoid paying their fair share of taxes, either in their home member states, or the home in which they are based.

"Lots of states across Europe and indeed the world, have been in positions where they have to impose severe and very restrictive austerity policies as a result of a lack of finances."

"The crux of it is, there is a huge problem internationally because the wealthiest people and the wealthiest corporations in the world think they can play by different rules."

How do wealthy Irish people & corporations use the Isle of Man to avoid paying their taxes? We know a lot from #ParadisePapers but I'm on my way to Douglas to find out more... pic.twitter.com/eKK3KnbIEB

Prior to the Isle of Man visit, TAX3 has had 25 missions to a number of jurisdictions across the world as a result of the 'Paradise Papers' which were released last year.

The European Parliament has commissioned two other inquiries prior, following the 'Lux Leaks' in 2014 and 'Panama Papers' in 2015, committees of which Mr Carthy has also been a part of.

The two day trip included meetings with government officials and representatives from across the finance sector.

"I'm Irish. I didn't intend to go to the Isle of Man and stand in a glass house and throw stones, I went there to put forward very frank questions to get, insofar as is possible, the information that would help me in terms of my deliberations.

"I met with people who I think were genuine in their belief that they want the Isle of Man to have their independent taxation policy - which every place is entitled to do - and who believe they have been taking steps towards addressing some of the issues, but the truth of the matter is, a number of questions remain unanswered.'

Mr Carthy stresses the I.O.M isn't alone in terms of being a culpable state citing his own country, the Republic of Ireland, of having a 'less than inglorious record in terms of its own dealings with corporations.'

"There is no state in the world that says they are a tax haven. Everybody always denies it.

"But what I always say is 'a tax haven is like being an early riser or a good kisser', it doesn't matter what you think yourself, it's what others think about you.

"The truth of the matter is, the Isle of Man, like several other places across the world, has a reputation in relation to the facilitation of tax avoidance.'

Earlier in the month, the European Commission had highlighted what it purported to be abusive VAT practices with regards to the registering of private aircraft on the Isle of Man and subsequently, opened infringement proceedings.

Such avoidance of VAT has been personified by the five-time Formula One World Champion Lewis Hamilton, on an Island which has over a thousand registered private jets, something Mr Carthy finds disproportionate.

"When we met with every official and organisation on the Isle of Man they all stressed that VAT rules were the same as anywhere within the EU and that the regulations to deal with it were stricter than anywhere else.

"So the question has to be asked - why is it, then, that so many billionaires decide to register their jets in the Isle of Man?"

On Tuesday, the final draft report was put to the Commission with a resolution that called for the rapid conclusion of its investigations into the Island's VAT collection.

On beneficial ownership, the MEP outlined the case of the Mircosoft-owned business networking site LinkedIn, which uses a shell company in the Isle of Man to transfer subsidiaries from Ireland.

He raised the question of what steps were in place in Manx law to detect and prevent such shell companies which 'have no economic substance'.

"We know in Ireland they've [Microsoft] used the 'double Irish structure' with a Bermuda subsidiary to avoid taxes.

That's something he admits is the fault of the Irish government for not having stricter policies in place for companies such as Microsoft.

"They [LinkedIn] have transferred 25% of their turnover to an Isle of Man subsidiary as intellectual property, so that reduces its Irish profit margin to the point that for a certain number of years it doesn't have to pay corporate tax in Ireland, whatsoever. The Isle of Man subsidiary has obviously paid no corporation tax there.

"The only physical connection to the Isle of Man is the address of the company secretary. It's a residential flat from which the same individual is managing over a hundred companies.

"So it's purely in the interest of the people of the Isle of Man not to be associated with that type of activity."

"There is no benefit to anyone on the Isle of Man to that type of structure. There's no jobs being created. There's no tax being paid.

"The only people that benefit from that scenario are massive, multi-national corporations to the tune of billions in taxes it doesn't need to pay."

A meeting with Appleby was high on the committee's agenda given the law firm's role at the centre of the Paradise Papers, however members were informed on the night of it not happening. It lead to false reports that they had cancelled last minute, when they had in fact declined to meet upon invitation several weeks ago.

The cancellation, according to the Sinn Féin politician, is besides the point.

"It wasn't a witch hunt by any stretch of the imagination. In terms of engagement with Appleby, what we wanted to know was whether or not they were taking sufficient steps to address the reputational damage that had been caused for them, and whether or not they saw a positive role they could play in terms of eliminating mass, corporate tax avoidance.

"If either of those is true, then, I think that is very disappointing."