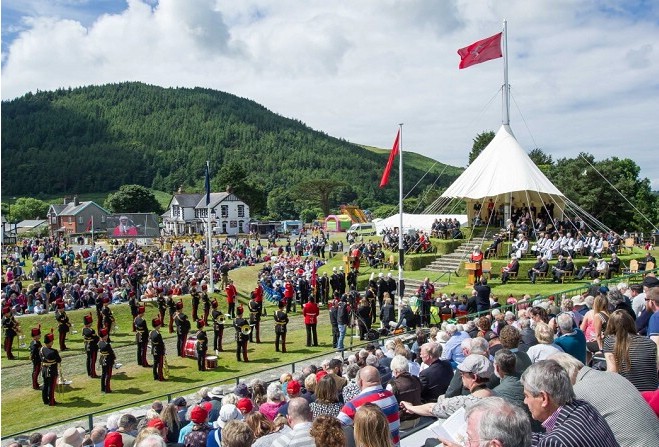 Neighbouring parliamentarians join in the pageantry

Parliamentarians, civic leaders, and various other dignitaries are invited each year to take part in the Island’s national day at the open-air sitting of Tynwald Court in St John’s.

Invitations sent by the President of Tynwald go out well in advance of the event. Steve Rodan said during his time in office he’s sought to cast a wide a net as possible in the hope of attracting some ‘big names’.

There a number of categories of visitor, but the primary aim is to invite parliamentarians from neighbouring countries and from further afield to build international ties.

This year there’s Irish, Scottish, English and American guests from a range of backgrounds; let’s take a look at the list.

Sinn Féin’s foreign affairs spokesperson has had a long involvement in politics, starting off as a community activist in Rathafarnam, Dublin in the 1970s. Mr Crowe was an organiser of the ‘Youth Against H-Block and Armagh in 1980-1981, supporting the Irish republican hunger strikes at HM Prison Maze.

He later played a role in the multi-party talks which led up to the Good Friday Agreement, and now serves his Dublin South-West constituency as a Teachta Dála in the Irish Parliament.

In the last year he’s been campaigning for greater access to mental health services, and as foreign affairs spokesperson condemned air strikes conducted in Syria.

Despite reaching the retirement age of 65, Sir Collas was granted a two-year extension in 2017 by the Queen to his continue his civic service.

Born in Glasgow 1956, and of Italian origins, the Scottish National Party member was first elected to Parliament in 1999.

For her efforts developing ties between Italy and Scotland, Ms Fabiani was made ‘Knight of the Order of the Star of Italian Solidarity’.

The MSP successfully toppled Labour candidate Andy Kerr in the May 2011 election, a result which was hailed a major victory for the SNP. Kerr had been considered a successor to Scottish Labour Leader Iain Grey.

Following the 2016 Scottish general election, Ms Fabiani was appointed as one of the two Deputy Presiding Officers of the Scottish Parliament.

A politician for Fianna Fáil, Mr Gallagher has served as the chairperson of the Dáil Éireann, the lower of house of the Irish parliament, since 2016.

He’s also been a Teachta Dála several times for the Donegal constituency, and been a Member of the European Parliament.

Interestingly Mr Gallagher middle name, ‘The Cope’, relates to his family ties to a cooperative retail chain operating in ‘The Rosses’ area of County Donegal.

Due to a difficulty in saying the word ‘Co-op’, the name Cope was adopted instead, and has become the Fianna Fáil politician’s semi-official nickname since.

With an impressive amount of post-nominals, the UK Ministry of Defence’s director of submarine capability was previously the assistant naval attaché in the British Embassy in Moscow during the 1990s.

Returning to the sea later in his career, Rear Admiral Hodgson was made an MBE following his handling of an engineering defect whilst onboard the HMS Trenchant.

At one point, he was responsible for the capability management of the UK’s Strategic Nuclear Deterrent, including submarines, missiles, and warheads.

In 2016, Rear Admiral Hodgson was tasked with delivering a future submarine programme for the UK, including nuclear propulsion and weapons systems.

The Labour politician was a Chorley Councillor for eighteen years, before being elected to the House of Commons in 1997.

In 2010 he was elected a deputy speaker and the fantastically titled ‘Chairman of Ways and Means’, and two years later he was appointed to the Privy Council, the highest court of appeal for the Isle of Man.

Sir Hoyle was acting as speaker during the Westminster terrorist attack on 22 March 2017, when the Commons was in ‘lock down’.

The Rt Hom Lord Keen of Elie QC, HM Advocate General for Scotland, ministry of justice spokesperson for the Lords.

Scotland’s Advocate General since 2015, Baron Kneen of Elie is also the UK Ministry of Justice spokesperson in the House of Lords.

Notably for the Island, he advises the Secretary of State for Justice on policy matters relating to the UK’s constitutional relationship with crown dependencies.

Lord Kneen played a role in ensuring the Island didn’t have a say in Brexit, having argued there was no constitutional requirement for the devolved administrations to consent.

Ms Mencer serves at the U.S. Embassy in London, covering issues such as NATO and cyber security policy. She’s previously worked at embassies in Santo Domingo, Barbados, and the Dominican Republic.

Rt Hon Lord Reed, justice of the UK supreme court, member of the judicial committee of the Privy Council.

Lord Reed is the Deputy President of the UK Supreme Court and a member of the judicial committee of the Privy Council. In that role he sits on appeals from the Isle of Man.

Lord Reed is also a member of the panel of judge of the European Court of Human Rights.

Commodore Waterhouse has served in logistics command posts on several frigates, destroyers and other vessels, including HMS Broadsword, HMS Coventry, and HMS Beaver over the 35 years.

The Royal Navy Chief is now regional commander for northern England and the Isle of Man – he’s also a practising ECB Cricket Umpire.