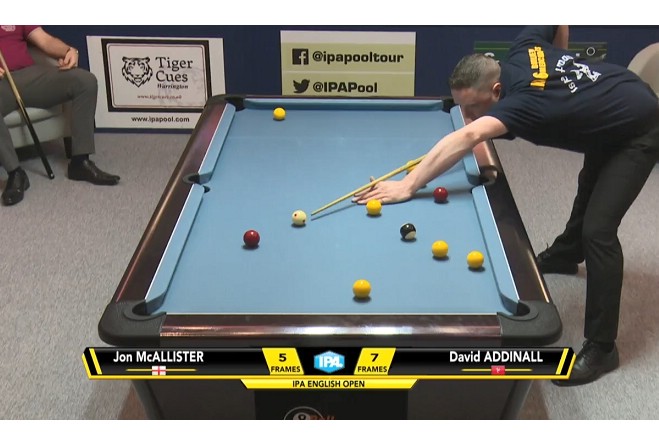 Addinall on a final clearance to win 8-5 in L32

Manx professional 8-Ball Pool player David Addinall produced another stellar performance in international competition, reaching the quarter finals in the 'professional' tier of the English Open in Bradford this weekend (11-13).

Just weeks after defeating 2016 World Champion Gareth Hibbott in the Champions Cup event, Addinall progressed through a field of the world's best, and was only beaten by the eventual tournament winner.

Addinall waltzed to an 8-0 whitewash in the first round against Simon Webb, before defeating Jon McAllister 8-5 at 10:15 on Saturday morning, streamed live on Freesports TV.

He produced another good display in the last 16 to beat Ronan McCarthy 8-4, and lost to an in-form Jordan Shepherd 8-4 in the last eight, who went on to win the final after a deciding frame.

Two of the Island's other top players also made the trip, entering into the 'amateur' and 'open' tier events - Ian Caines and Calum Gardner struggled in their matches, but will have gained valuable experience for the future.

For more information, fixtures and full results, go to www.ipapool.com.