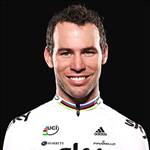 Mark Cavendish has recovered sufficiently from a fever to make his Team Sky debut in the opening stage of the Tour of Qatar.

The Manx Missile has been struggling with a fever for the last day or so.

Team Sky’s Sports Director Steven de Jongh says, “We’re all delighted that Mark has been able to battle back from the bug he picked up coming out here and it will be a real boost to the rest of the guys to know that he’ll be starting today.

“Our medical team have done a fantastic job in looking after him and Mark has followed their advice to the letter. Clearly, he’s not going to be at his best in the next few days but we’re hoping he’ll get stronger with every passing stage.

Cav joined the British outfit after the HTC High Road squad disbanded at the end of last season.

He will be looking for early sprint wins at the beginning of his 2012 campaign as the event is held over mainly flat terrain.

Today's opening stage is 142.5km long and ends at the Doha Golf Club.

The World road race champion will be up against other top sprinters in the field including Thor Hushovd, Phillipe Gilbert, Tyler Farrar, Robbie McEwan, Andre Greipel, Tom Boonen and his former HTC lead-out man Mark Renshaw.

Cav has set two tough main targets for 2012 - win the Green Jersey at the Tour de France and follow that with gold in the road race at the London Olympics.