Fiery battle at The Bowl ends all square 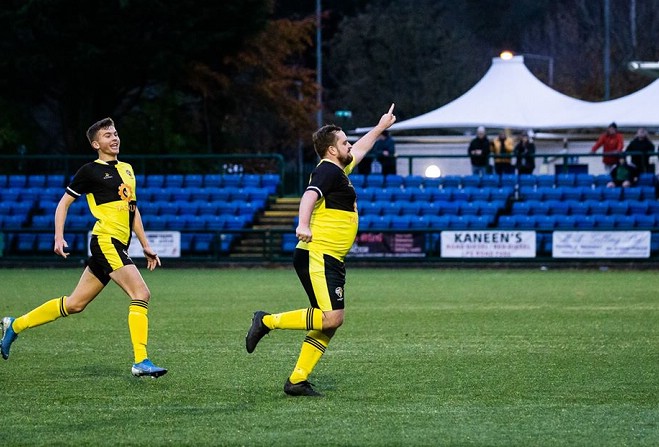 Johnny Myers scored a hat-trick for Geordies and thought he'd put his side on course for a massive victory in the Canada Life Premier League.

However, with the score at 4-3 and time running out, the referee awarded a penalty which Jack McVey - who had already scored from the spot earlier in the match - duly converted to rescue a point for Marys.

A fiery match saw the hosts' Adam Adebiyi and St Georges' Sean Quaye sent off during regulation time, before Maleigh Freestone and Furo Davies both received red cards after the final whistle as emotions boiled over.

Dan Hattersley and Matty Kent-Lloyd were also on the scoresheet for St Marys, while Chris Bass was the visitors' other goalscorer.

There were also a high number of cards handed out in the match at Douglas Road, where Corinthians stretched their great run to five straight wins.

First-half strikes from Josh Ridings and Luke Murray were enough for The Whites, who eventually prevailed over the nine men of Peel - who had a player sent off either side of the interval.

John Kelly was dismissed in the opening period, before Corinthians were reduced to ten as Ryan Burns was sent for an early bath following an alleged foul-mouthed exchange with the officials.

The westerners then halved the deficit when Lee Gale made it 2-1, but the referee produced another red card, this time for Peel's Rhys Oates, as Corinthians saw the game out to take all three points back to Ballafletcher.

Despite a goalless first half in the match at Croit Lowey, Rushen eventually made their quality show as five goals without reply in the second 45 minutes meant The Spaniards sealed maximum points.

Alex Maitalnd, Mike Williams, Alex Guy, Jamie Johnston and Alex Guy were all on target against a valiant Pulrose outfit who remain pointless in the top flight standings.