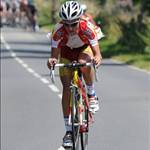 Kennaugh led for 15 miles or so but had to settle for the runners-up spot in the 68 mile event after George Atkins triumphed in a sprint finish.