On Air Night Flight | Midnight - 5:00am
Michael Bolton - Can I Touch You, There? Download 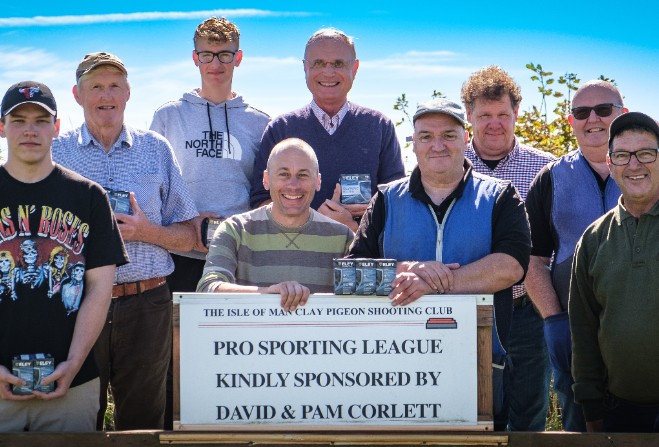 The fifth round of the Summer Pro Sporting League was held at Meary Veg, Santon on the morning of Sunday, 4 September, with 17 competitors taking part in glorious sunshine with very light winds.

Round two was kind to few, with the Corlett boys bringing home mid teens, Craine Senior leapfrogged by son Calum on 21, and just three competitors clearing the final barrage of instant pairs without dropping a target: Kelly, Cross, and newcomer Daniel Zorab, who bagged one point more on the pairs than in his very first round. Also making good on an iffy start of ten points in her first round was Allana Wade, who upped her game to 18 points, while Cross went from 18 to 23 and Kelly from 18 to 22, with Barnett improving on 22 with an extraordinary 24.

The morning’s excitement drew to a close with Peter Kelly and David Clague in equal third on 40 points, Stan Cross in second on 41, and Mark Barnett on top with 46 points.

The afternoon of Sunday saw yet more sporting action in ideal conditions, and this time it was the fifth round of the Summer English Sporting League which brought 20 competitors out into the early September sunshine, tackling 50 targets across five stands.

Freshly back from competing in the British open, junior Joe Faragher wasted no time on stand one with a respectable nine hits, followed by Peter Kelly, Rob Corlett, and George Davies with eight points each. By stand two it was time for Joe’s father Brian to take over, putting Faragher (senior) in the lead with nine followed by Kelly and Paul Mihailovits on eight targets each.

All change again on stand three, with Joe Faragher bagging a perfect ten, joined by watchful veterans Dave Corlett and Stan Cross, and followed by Mihailovits and Rob Corlett on nine. Neither Faraghers were seen at the top of stand four, where a bevy of eight competitors scored nine points each, including class C shooter Alan Wright.

The fifth and final stand consisted of a high teal and a low, floaty incomer – two types of target typically loved or loathed – and again we saw a solid group at the top, with six shooters scoring perfect tens and another six on resplendent nines.

At the end of five rounds and with the sun still smiling we had Joe Faragher, Rob Corlett, Peter Kelly and Dave Corlett sharing second place on 40 points, with Paul Mihailovits riding high on 42.