From the Gospel of St Matthew, Chapter 17 ...... Jesus took with him Peter, James and John the brother of James, and led them up a high mountain by themselves.  There He was transfigured before them. His face shone like the sun, and His clothes became as white as the light.  Just then there appeared before them Moses and Elijah, talking with Jesus .....  A bright cloud overshadowed them, and a voice came from the cloud saying ...This is my Son, the Beloved, in whom I am well pleased.  Listen to Him .... And when the disciples heard this, they fell on their faces and were very afraid - but Jesus approached them and touched them, saying 'Do not be afraid'  They lifted up their eyes and saw nobody except for Jesus himself.  And as they were going back down the mountain, Jesus gave them instructions - 'Do not tell anyone what you have seen, until the Son of Man is risen from the dead'

At MOUNT TABOR, overlooking the Sea of Galilee, the CHURCH OF THE TRANSFIGURATION gives us a place and space to reflect on this amazing moment when Jesus gives a glimpse of His glory to just a chosen few of his disciples, and the voice from the cloud leaves them (and us!)  in no doubt about the Sonship of Jesus.  But there's also a warning that all this will only make complete sense in the light of the Resurrection.   It also marks the start of Jesus' walk to Jerusalem - a walk He knows will lead Him to suffering and death on the cross - but the road which will end in His Resurrection and supreme glory. 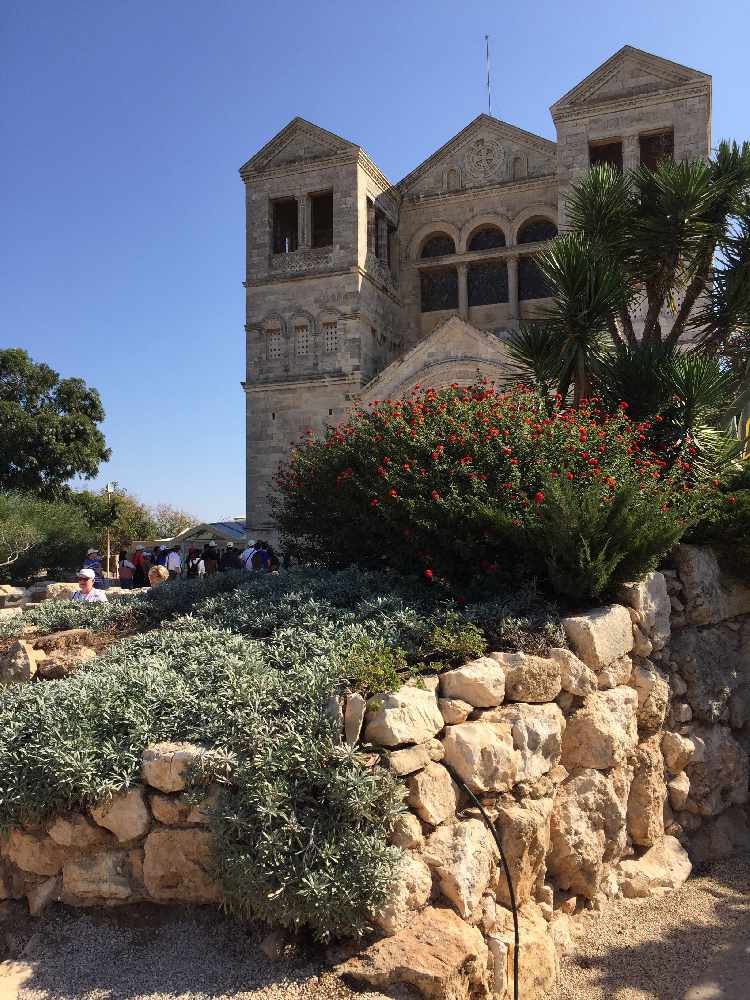 The stunning interior is on two levels ..... 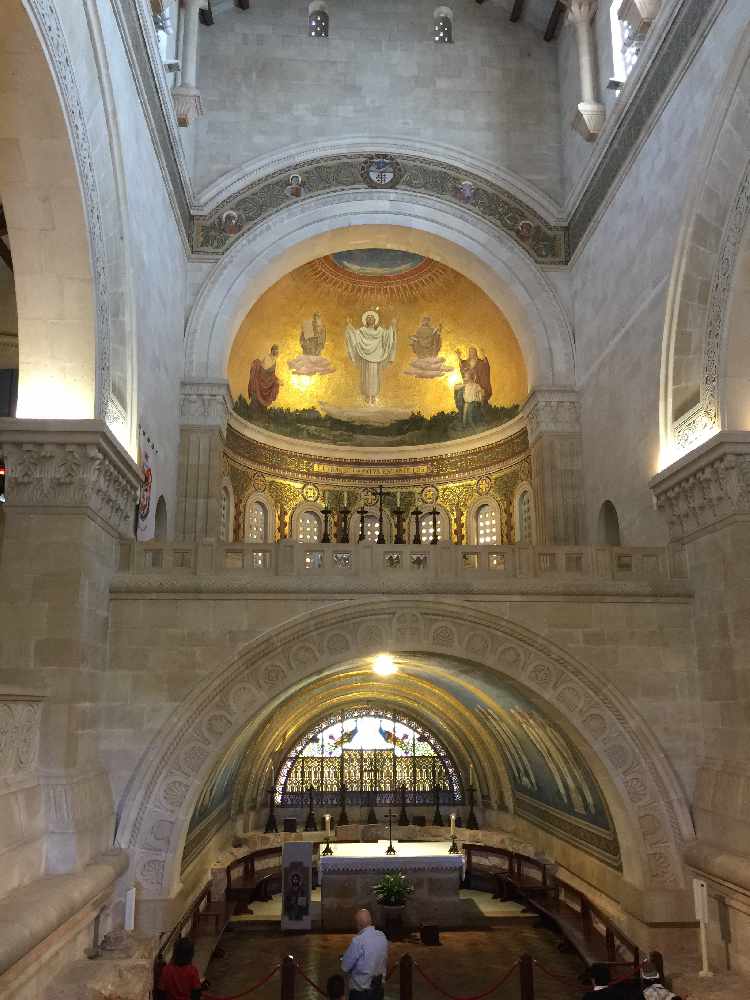 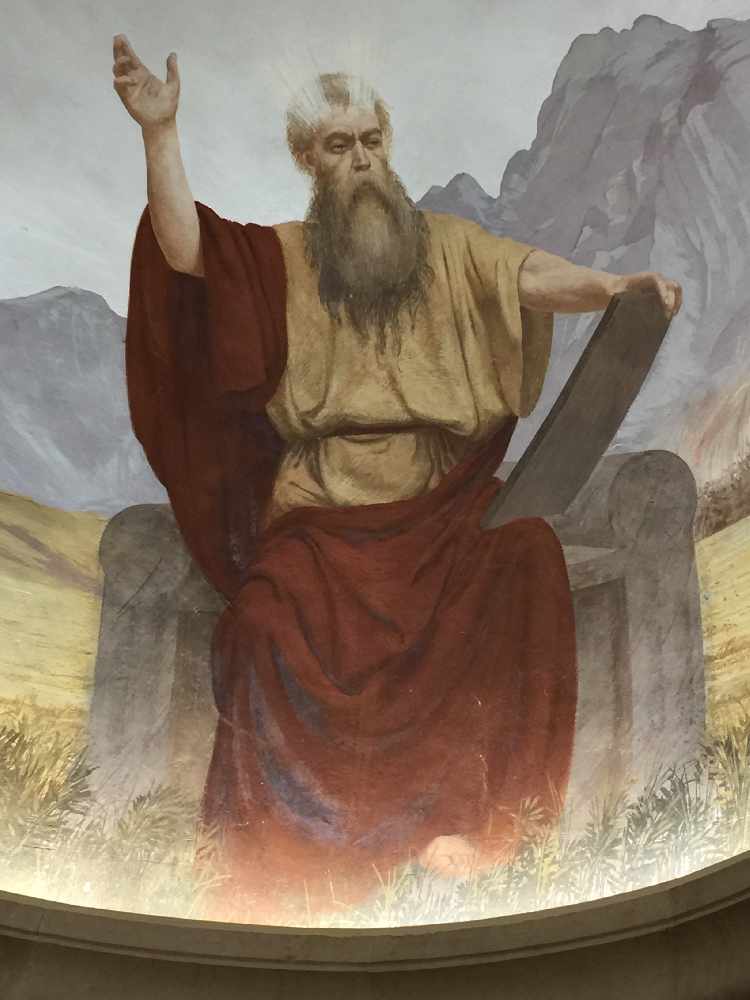 ... with side chapels dedicated to Moses and Elijah.  This is a detail from the Moses chapel (a service was being held in the Elijah chapel during the time of our visit)

From Mount Tabor, we went to CANA - the place of Jesus' first miracle - turning water into wine at the wedding feast.  We cannot be sure of the exact site of the miracle - but the area isn't large, so we could be sure that the peaceful little garden of the church where we stopped, wouldn't be too far away from the actual place!  Our time of prayer here was made particularly special as three couples in our group - Howard and Sandra, Colin and Margaret and Jane and Andrew each renewed their marriage vows in a very personal and sincere ceremony, let by Reverend Dawn.  It's a good opportunity to share a group photo - we all felt so privileged to share in this very blessed moment .... (the happy couples are at the centre of the front row!) 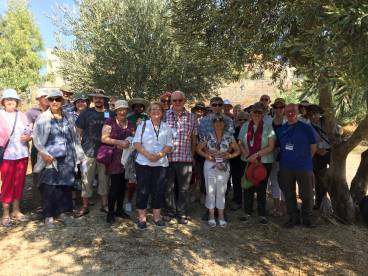 We didn't manage a wedding feast - but we did have lunch at Cana, before heading off to NAZARETH - the home of Mary - to explore the most spectacular commemoration of the life of this young girl of no status and living in an insignificant village, who was nevertheless chosen to be the Mother of Jesus.

This impressive modern basilica  has within it a smaller, more simple chapel - or grotto - over the place where the Angel Gabriel is believed to have appeared and spoken to Mary.  The rest of the vast church celebrates the glory of Mary as the Mother of God, and our model of obedience.   Here's just a small section of the outer wall of the Basilica of the Annunciation .... and of the colonnade area surrounding it, where we gathered for a time of prayer and reflection, before going inside..... 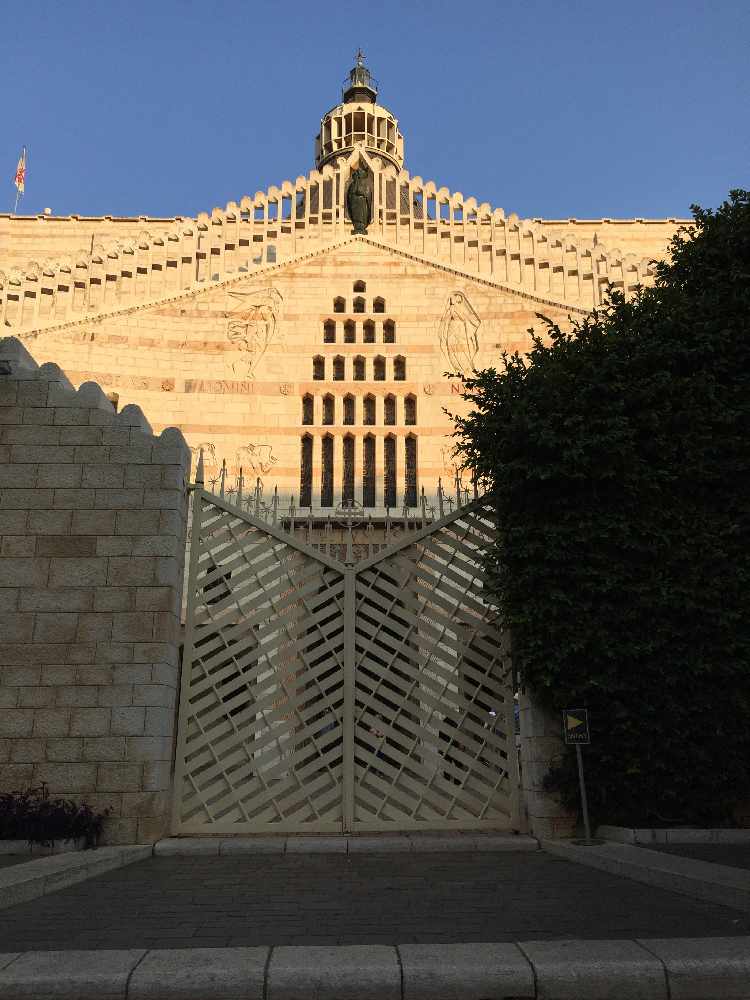 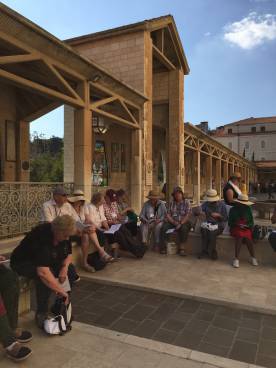 Below is a view of the inside the Basilica, looking down into the  the Grotto of the Annunciation  (centre of the photo) - the spot where the Angel Gabriel is believed to have appeared and told Mary - an unmarried virgin - that she was to have a child, that he would be named Jesus and that he would be the Son of God.  How much courage must it have taken, at Mary's young age, and in a culture with strict rules about betrothal and marriage, for Mary to say to the Angel ...... 'I am the handmaid of the Lord - let it be to me according to your word' (Luke 1:38) 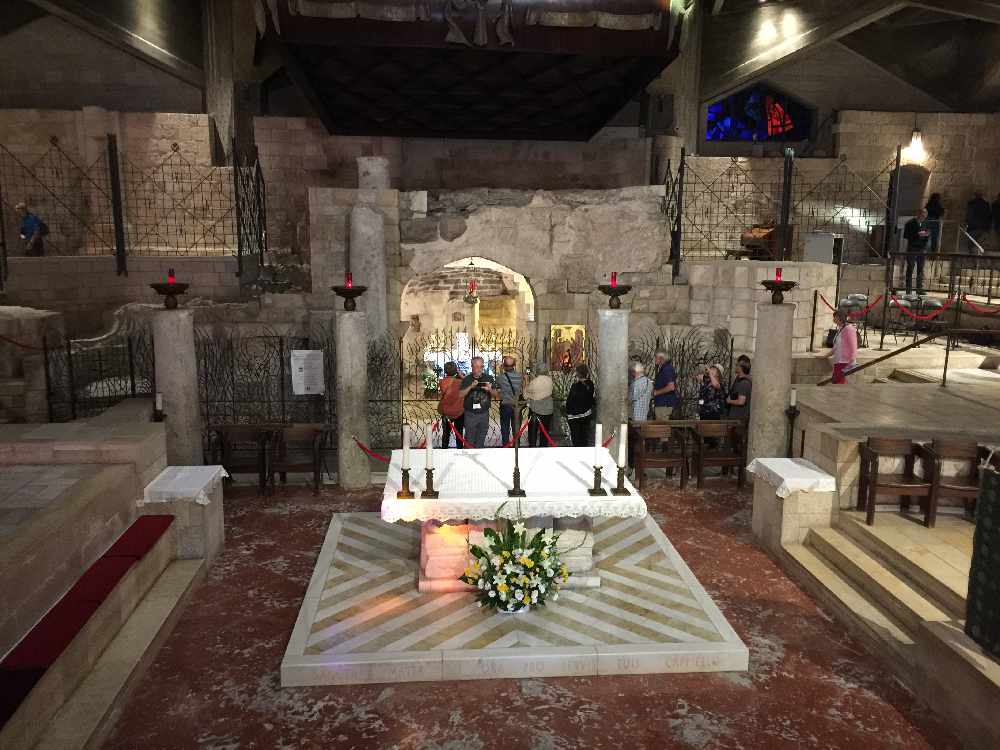 Here's a closer look at the Grotto itself, which has at its centre a rough cave-type house - Mary's home at the time of the coming of the Angel.  Within 300 years of the life of Jesus, this site was declared sacred, and it's remained so ever since, although, through the centuries, several different churches have 'stood guard' over it 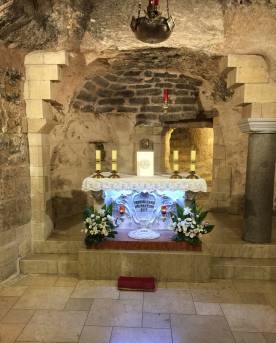 On the higher level of the Basilica are two splendid traditional side altars, to the Virgin Mary and the Crucified Christ 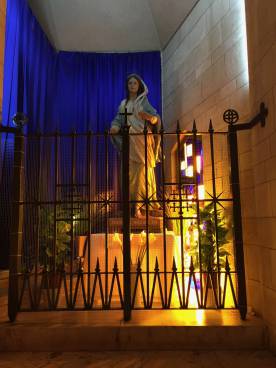 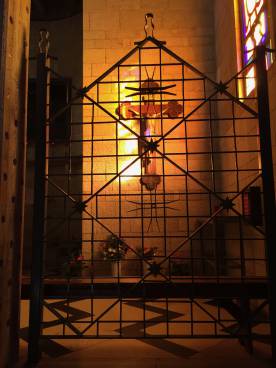 Around the inside of the Basilica, and in the colonnade area outside, are a glorious collection of modern-day icons.  Countries of the world, and some international organisations, have each prepared a piece of artwork depicting Mary according to their local culture - each one is full of symbolism - here are a couple of examples - the Canadian Mary .... 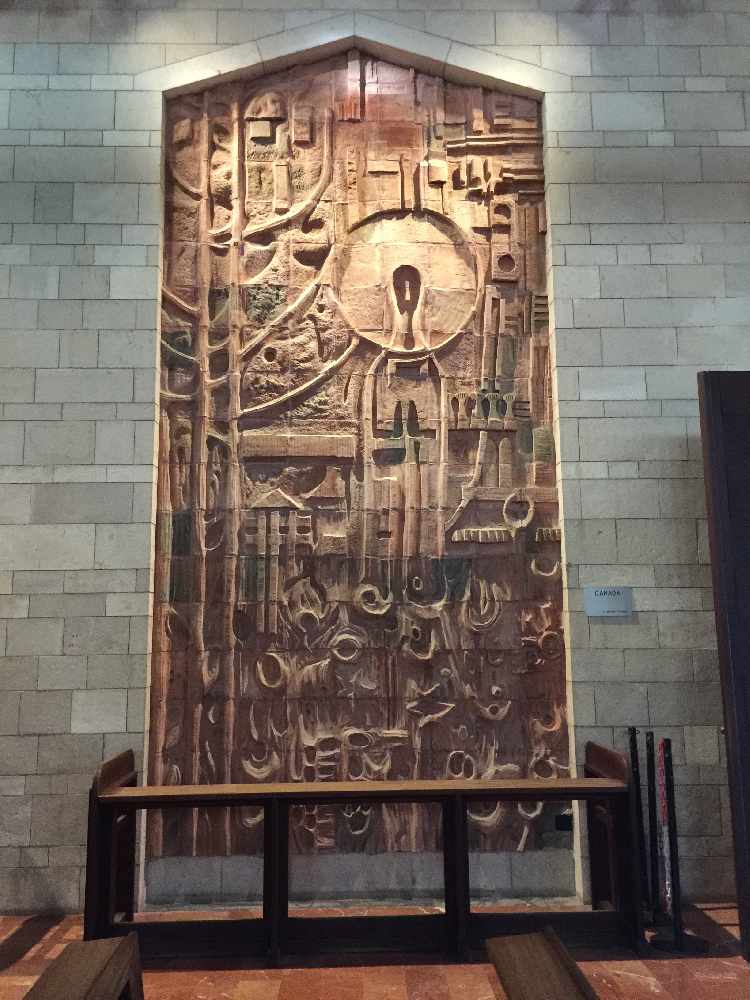 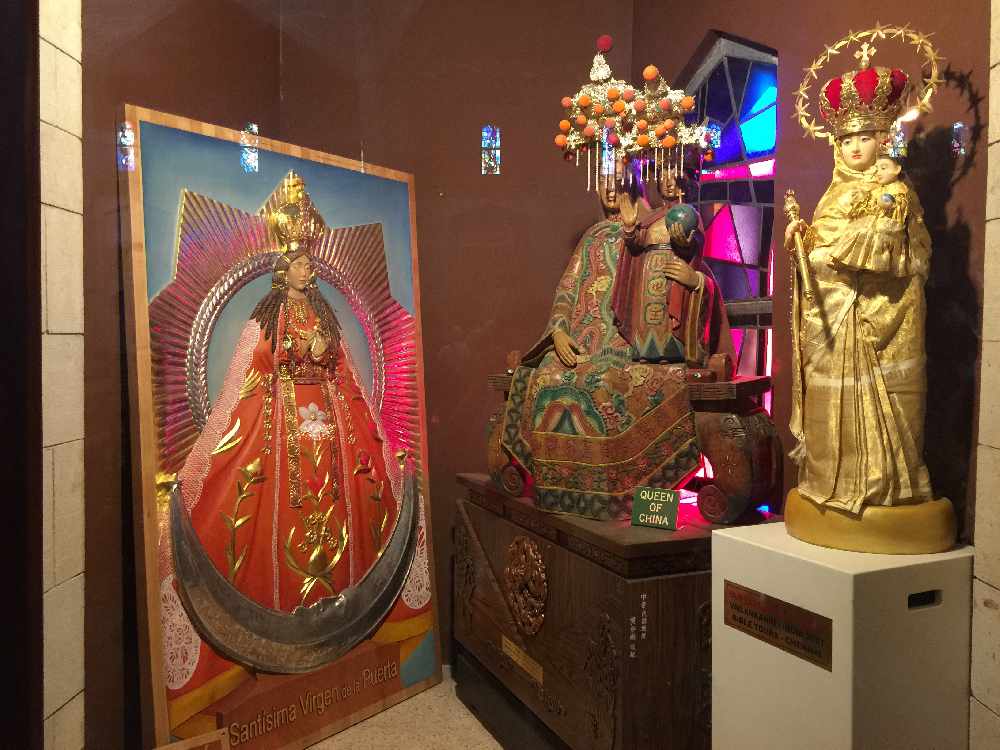 At every altar in large church or smaller chapel, outside on benches, a grass bank, or under an olive tree, pilgrim groups are praying and singing.  Truly, 'the voice of prayer is never silent - nor dies the strain of praise away'.  This group of pilgrims are celebrating Mass at the main altar in the Basilica, under one of the largest mosaics in the world, depicting 'The one, holy, catholic and apostolic church' 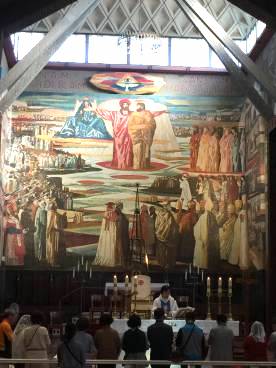 Almost in the shadow of the Basilica was our next stop - and this truly is a hidden gem - THE CONVENT OF THE SISTERS OF NAZARETH.

In 1881, a group of French nuns came, at the invitation of the local Bishop, to open a convent and care for about 40 refugee children from Lebanon.  The nuns bought some land and buildings, and three years later, whilst adapting them to meet their needs, they uncovered remains of much earlier buildings on the site - walls and tombs showing that this had been a Jewish burial site in 1st century Roman times, and remains of a house which had been in use even earlier than then.  Amazingly, although many people knew about the existence of this excavation site below the courtyard of the Covent, they were never professionally investigated until the 2006 Nazareth Archaeological Project, under the direction of Dr Ken Dark (from Reading University).  His excavation discovered a first-century 'courtyard house' that was partially hewn from naturally-occurring rock, and partially constructed with rock-built walls.  Many of the home's features were still intact, including a water cistern, windows and doors, and a tomb.  Dr Dark also uncovered a Byzantine church built on the site around 300 years after the lifetime of Jesus.  Although Dr Dark did not carry out any new excavations,  modern techniques made it possible to date what was already found at the convent much more accurately, and to interpret it in the light of what's know from other Roman and Byzantine sites.

So - what does this tell us today ?

Dr Dark's research produces very compelling evidence that this is the home in which Jesus was raised, by Mary and Joseph, from a boy to a man. As you might imagine, there's much more to be learned by searching about this on line (highly recommended!) but here's a couple of points to ponder ....  during the first excavations, a stone was found which seemed to be sealing a chamber, and when it was moved the scent of incense filled the air, indicating that this was a tomb. But only a very holy person was allowed to be buried in or near to a house ..... could that holy man be Joseph?  And only three hundred years after the time of Jesus, a Byzantine church was built over the house ..... the house known locally at the time as the House of the Holy Man .... surely a church would only be built over a house in exceptional circumstances ...  if it was known to be the home of the Holy Family?    Dr Dark brings in wide-ranging evidence to support his belief that these are indeed the amazingly complete remains of the home of Jesus, Mary and Joseph.  Here's the doorway -  indentations in the stone surround would have kept the wooden door in place, and stopped it swinging inwards.  Inside, a shaft of natural light enters through a fissure in the rock roof .... 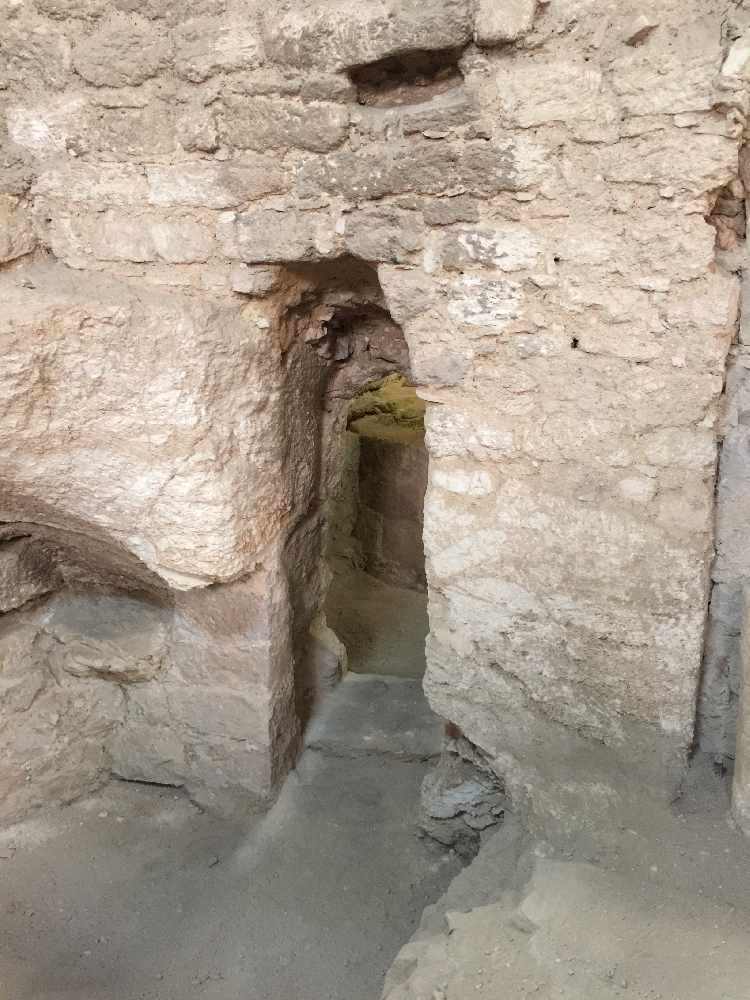 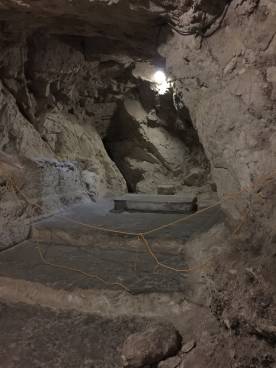 and here is the tomb (a deep hole in the rock, now covered by a protective grating) and next to it, the stone which was removed during the first excavation in the 1880's 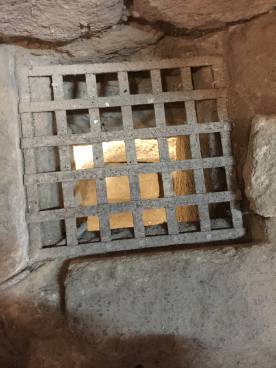 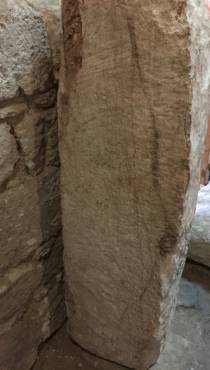 These are the remains of a house, so the space is very limited - only a small group of people can enter at any one time - and all visiting is by appointment only.  Well done to Rev'd Steve for finding this whilst on a fact-finding visit during his recent sabbatical, thanks to him for making the arrangements to get over 30 of us in - and out again!   It's a bonus when your guide is the wonderfully well-informed and talkative Irish nun, Sister Margaret - but be warned - she was until recently Head of a school with 1,200 pupils .....  disobey her directions at your peril!!

The true status of St Joseph is commemorated in a simple but beautiful church, found just behind the Basilica.  A statue stands outside the church door - I wonder how many pilgrims' hands have changed the patina of St Joeph's knees ?  Inside the church is another more traditional statue 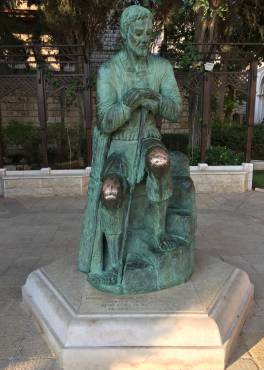 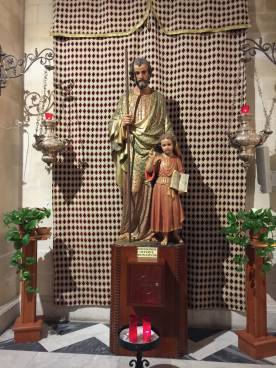 Although this church is dedicated to St Joseph, there's a statue of Mary in a side chapel which got a group of us talking ..... we're told that Mary was aged somewhere between 12 and 14 when she gave birth to Jesus - not unusual in her culture, when girls would be betrothed in marriage at a young age.  However, most pictures and statues show an older Mary with the infant Jesus - we thought this one really captures the innocence of a very young and unworldly 12-year-old ..... 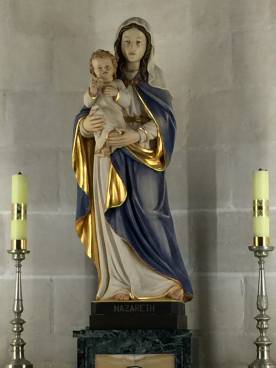 And from Nazareth, we headed back to base in Tiberius - the sun starts to set (rapidly!) around 4:45pm here,  but whether in full or fading light, the Sea of Galilee has a timeless, prayerful attraction ... 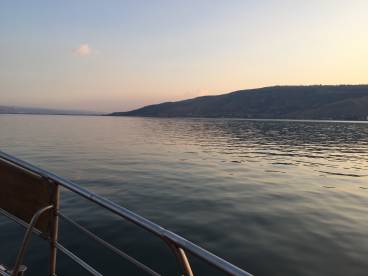 By the time we reached our hotel (5:15pm) it was fully dark - apologies for the very poor photograph, but our resident Astronomer Howard Parkin assured us that it is very unusual to see the Moon and the planet Jupiter so close together .... so here they are - outside the Golan Hotel in Tiberius! 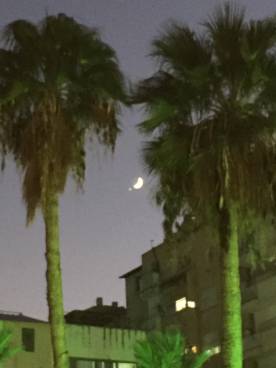 With love and prayers - and thanks for blogging along with us

from Rev's Steve, Rod and Dawn - and the Pilgrims!

PS - We've now got super-strong wifi - so MORE has been added to Day 2 - do please take another look!