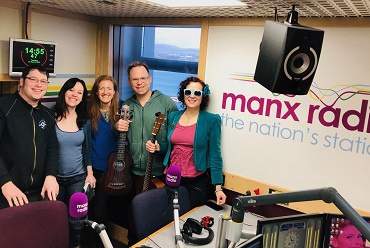 We were joined in the studio today by fabulous Delta Blues musicians Erin Harpe and Jim Countryman, who are visiting the Island by invitation of John Gregory from Blue John Media. They talked about their music, their background and they played two songs live in the studio which you can see below. Find out more about them at their Facebook page here, and at Erin's website here;

- we also chatted on the phone with Kath Giles, who told us all about her Triathlon with a difference on 30th March - a games night at the Ginger Hall Hotel. Kath is raising funds for Heroes on the Water Isle of Man and Belisama’s retreat in Lancashire, her fundraising page can be found here

- we also looked at several anniversaries and birthdays - the 30th of the World Wide Web (which led to Beth having a classic lightbulb moment on air, where she finally twigged what www stands for...) also Dennis the Menace who is 68, and Barbie who celebrates her 60th.

If you missed any part of today's programme, you can listen again at this link for the next 7 days.