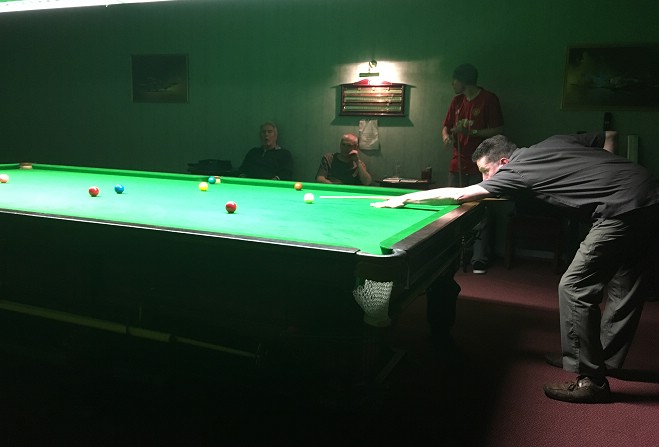 They were victorious in the Ramsey derby against St Olaves 'New Skool', with a 4-1 scoreline taking them eight points clear at the top.

Sean Corkish drew the 'New Skool' level with a break of 20 in the second frame, after Brian Howland had put the league leaders ahead - but John Kennish won convincingly with breaks of 32 and 24 against Paul Smyth before Mike Doherty and Peter Collister sealed the win.

Finch Hill 'Musicians' sit second after a 3-2 win at home to Douglas Snooker Club 'Wannabes' - Calum Gardner, Peter Glover (with a break of 20) and Vinny Dale put the home side ahead, before Stephen Harvey and Dave Corris pulled back valuable points for the guests at the end.

Douglas Snooker Club 'Hurricanes' leapfrog the 'New Skool' into third place in the table after a 3-2 win at home to Peel Legion - they went behind twice, after wins for visitors Don Humphries and Kyle Darby left Chris Dagnall and Lee Butterworth to make amends.

But Steve Munk potted well in the decider against an in-form Geoff Hall to take the decider for the 'Hurricanes'.

Finch Hill 'Mob' are fifth after a 3-2 win at home to Malew 1 - the visitors won the first and last frames through Nick Crouchman and Brian Kinnish, but breaks of 46 and 22 helped Tom Miller to a heavy victory in the second frame, before Steve Finnegan and Steve Oates also won for the home side in frames three and four to seal an important win.

Malew 2 did their hopes of finishing outside of the bottom two no harm at all, with a 5-0 win at home to Port St Mary Legion - there was not a close frame in sight as David Quayle, Tony Pring, Alec Oates, Paul Bridson and Mark Quinn all won for a rare whitewash.

Finally, the second match at Douglas Snooker Club was a high-scoring one, as the 'Bandits' won 3-2 at home to Finch Hill 'Rockets'.

Newcomer John Spellman produced almost certainly his best ever frame, winning 98 points to 22 over Dean France with two separate breaks of 25 points each.

Ste MacDonald and Graham France won for the home side against Ron Grogan and Dollin Mercer, before Graham Ashton set up a decider with a good win over Zain Abideen - a decider which looked all but over when Doug Kinrade led by around 40 points against Jamie Wilson, but Wilson produced an incredible clearance to the pink of 38 points to steal a win for the 'Bandits'.