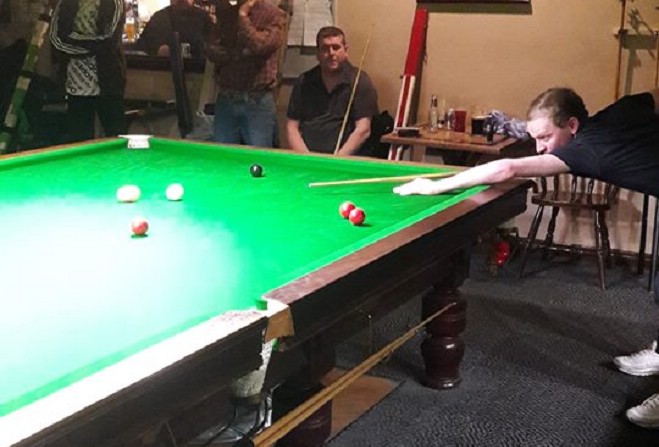 Marc Morley (left) watches on as Jamie Wilson clears up

Jamie Wilson set a new high break of the season in week ten of the 2018/19 Macs Builders Merchants snooker league – the final round of the calendar year.

The Douglas Snooker Club 'Newbys' man had a break of 72 in his frame win against Marc Morley of Port St Mary Legion, with teammate Ste MacDonald compiling a break of 35 in a win of his own against Shaun Roberts.

But the southerners had the last laugh, with wins for Dave Pickersgill, Terry Boyle and Phil Joynes (with a break of 22), to win 3-2 away from home.

In the west, it was a top-of-the-table clash between league leaders Peel Legion and second-placed Malew 2, which ended up largely one-way traffic.

Mike Crook was the only winner for the hosts, with a break of 22 not enough for Don Humphries to claw back the handicap deficit against an in-form Tony Pring.

Pring, Mark Quinn, David Quayle and Alec Oates, with a break of 24, made it a successful trip for the Ballasalla side who now leapfrog their opponents to sit top of the table going into the new year.

All four Finch Hill teams were effectively at home this week, as the 'Rockets' hosted the 'Mob' and the 'Young Guns' faced the 'Musicians'.

On one table, the 'Mob' raced to a 4-0 lead, with wins for Peter Kirkham, Steve Oates, Tom Miller (with a break of 36) and Steve Finnegan – but Ken Kinrade anchored well, with a break of 32 as he beat Pete Crellin to avoid the whitewash.

On the other table, Peter Glover moved to four wins from four for the 'Musicians' as he had a break of 25 en route to defeating Darryl Hill, who also had a 24.

Matthew Dodd sealed the win as he beat Rhys Moore, but Dollin Mercer won the final frame against Lee Hunt to make it 3-2.

There was a whitewash at Douglas Snooker Club, as the 'Hurricanes' went to town on the visiting St Olaves side.

Nigel Kermode, Chris Murphy, Chris Dagnall and Gary Conwell all won to put them 4-0 up, leaving Paul Smith to seal the 5-0 victory despite a break of 43 for Sean Corkish in the final frame.

In Ballasalla, Malew 1 fought back from 2-0 down to level the scores with wins for Tony Cubbon and John Faragher, after Paul McKinstry and Steve Cowin had put the visiting Douglas Snooker Club 'Wannabes' two frames ahead.

But Dave Corris won the decider for the guests to make it 3-2, completing an important win for the 'Wannabes' who remain bottom of the table.

Sean Corkish now tops the break league, on 18.5 points, after his break of 43 this week added three to his tally.

He knocks Peter Kirkham off top spot, who sits second with 18 points scored so far.

Tom Miller, Jamie Wilson and James Kerr make up the top five on 17.5, 15.5 and 11.5 respectively, with Wilson jumping up the table after his 72 break scored him six points this time round. 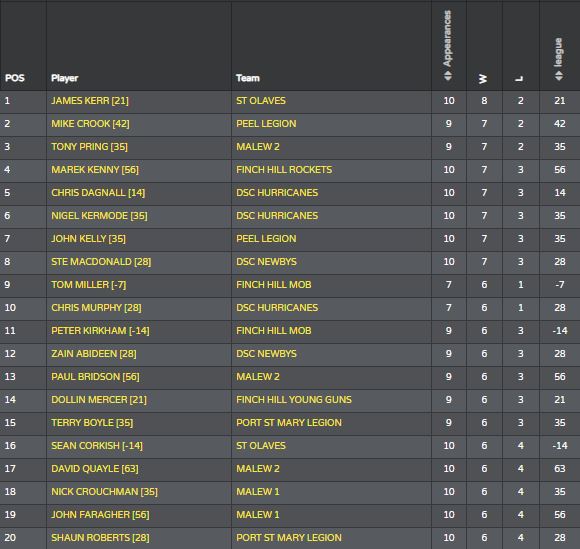