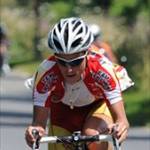 There was double celebration for the Kennaugh brothers yesterday when 17-year-old Tim won the Isle of Man Road Championships, while his elder brother Peter, who turns 20 today, had an early birthday present when he won the mountainous third stage of the Baby Giro to move up to second overall.

Kennaugh was part of a seven man break that sprinted for the line after a tough 166km in the Italian mountains near Lake Garda.

The 10 second bonus that came with the win moved Kennaugh up to second place overall with a chance to make further inroads in today's 25km time trial.

The GB rider also consolidated his lead in the Mountains jersey, leads the Points competition and leads the competition for non-Italian riders in the 10 day tour for under-27 age competitors.

Mark Christian is also competing, coming home in 120th place yesterday, and has been doing a sterling job for his team leader.

Tim Kennaugh became one of the youngest winners of the Isle of Man Road Championship with his emphatic victory in the 73 mile event yesterday.

By mid-distance of the eight lap race the Manx Telecom rider had gained a lead of 2 minutes 40 seconds and lap on lap his lead would grow.

Last time up Bride Hill Kennaugh had a lead of four minutes over Andrew Roche, with the main bunch a further minute back.

On the final run in to Ramsey, Kennaugh's hard six hour winter training rides with Cavendish, Bellis and his older brother would pay dividends as he extended his lead to over five minutes at the chequered flag.

Roche finished second and took the senior champion title in the process, while Chris Whorrall led the break home for third a further three minutes behind Roche.